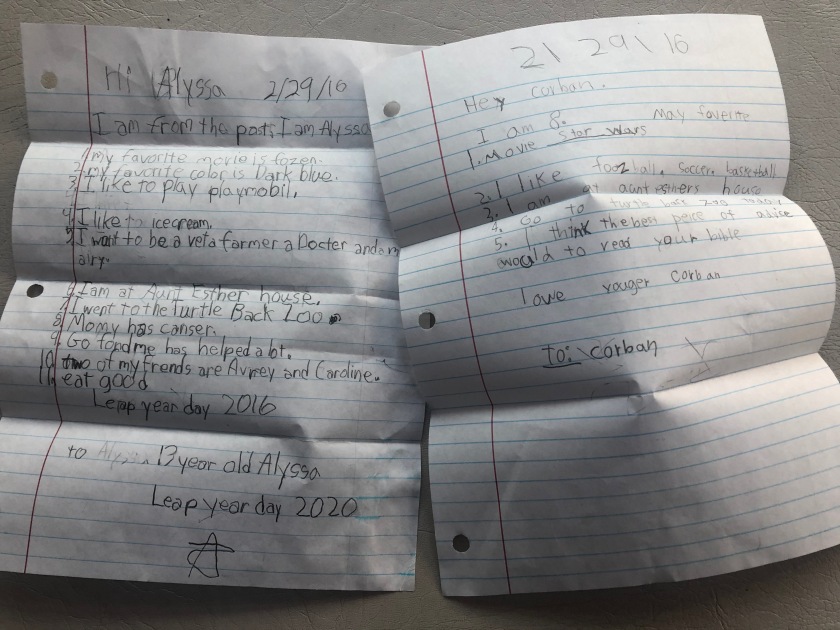 “I went to the Turtle Back Zoo.”

Three short thoughts written as part of a letter I had my nine-year-old niece write in a letter to her future Leap Day 2020 self.

My eight-year-old nephew wrote one too.

Four years ago, these two every-day kids came to stay with me for several weeks while their mom was undergoing intensive treatment for “canser.”

Four years ago, they didn’t know if their mom would be here for Leap Day 2020.

Four years ago, they were kids whose favorite movies were Frozen and Star Wars (like every other tween girl and boy).

I sent my now twelve- and thirteen-year old nephew and niece their letters 500 miles away.

Four years have passed since those words were penciled on loose-leaf paper.

Four years, where they have endured the worst: the loss of their mom.

Four years, where my brother picked up the pieces and entered in a new normal without his wife to help him navigate the journey without her.

Four years, where my then 17-year-old niece (the “older sister”) gathered her own heart together and plugged away at her future as a nurse one painful and healing day at a time.

Four years, where this little family laughed and cried, played and worked, fought and made-up, just like the rest of us.

Leap Day 2016 feels like yesterday, those two kids sitting at my kitchen counter, their future unknown, penning words to themselves.

I didn’t know if heartache or hope would come before those letters were read four years later.

Yes, heartache came in like an untamed beast, threatening to rip this family to shreds.

BUT that is not the end of the story.

Four years later, I can say HOPE reached in louder as God took extra, tender care of this little family without their wife and mom.

Four years later, there are two budding teens who are smart and kind and full of life, with friends and pets and who still secretly like Frozen and Star Wars. HOPE.

Four years later, there is a man who has fought hard to help his family take their next right steps and love each other no matter what comes their way. He rocks as a dad! HOPE.

Four years later, there is a Registered Nurse, who trusted God and got up every morning to go to school, putting one foot in front of the other. She started her first job this month. HOPE.

Four years from now. What will life bring?

To my brother and his family?

To me and mine?

But, that will not be the end of the story.

HOPE will reach in louder.

God will take extra, tender care of us all.

This site uses Akismet to reduce spam. Learn how your comment data is processed.